Nuclear War Could Mean Annihilation, But Biden And Congress Are Messing Around

President Joe Biden and top subordinates have refused to publicly acknowledge the danger of nuclear war — even though it is now higher than at any other time in at least 60 years. Their silence is insidious and powerful, and their policy of denial makes grassroots activism all the more vital for human survival. 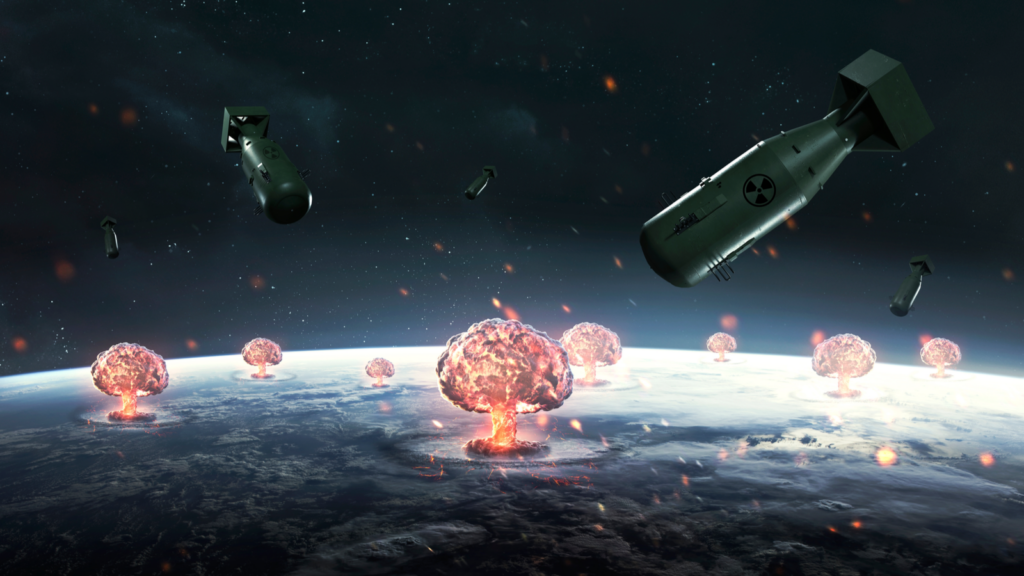 In the aftermath of the 1962 Cuban missile crisis, President John F. Kennedy was more candid. Speaking at American University, he said: “A single nuclear weapon contains almost 10 times the explosive force delivered by all the allied air forces in the Second World War.” Kennedy also noted, “The deadly poisons produced by a nuclear exchange would be carried by wind and water and soil and seed to the far corners of the globe and to generations yet unborn.” Finally, he added, “All we have built, all we have worked for, would be destroyed in the first 24 hours.”

Kennedy was no dove. He affirmed willingness to use nuclear weapons. But his speech offered some essential honesty about nuclear war — and the need to seriously negotiate with the Kremlin in the interests of averting planetary incineration — an approach sorely lacking from the United States government today.

At the time of Kennedy’s presidency, nuclear war would have been indescribably catastrophic. Now — with large arsenals of hydrogen bombs and what scientists know about “nuclear winter” — experts have concluded that a nuclear war would virtually end agriculture and amount to omnicide (the destruction of human life on earth).

In an interview after publication of his book The Doomsday Machine, Pentagon Papers whistleblower Daniel Ellsberg summed up what he learned as an insider during the Kennedy administration:

What I discovered — to my horror, I have to say — is that the Joint Chiefs of Staff contemplated causing with our own first strike 600 million deaths, including 100 million in our own allies. Now, that was an underestimate even then because they weren’t including fire, which they found was too incalculable in its effects. And of course, fire is the greatest casualty-producing effect of thermonuclear weapons. So the real effect would’ve been over a billion — not 600 million — about a third of the Earth’s population then at that time.

What turned out to be the case 20 years later in 1983 and confirmed in the last 10 years very thoroughly by climate scientists and environmental scientists is that that high ceiling of a billion or so was wrong. Firing weapons over the cities, even if you call them military targets, would cause firestorms in those cities like the one in Tokyo in March of 1945, which would loft into the stratosphere many millions of tons of soot and black smoke from the burning cities. It wouldn’t be rained out in the stratosphere. It would go around the globe very quickly and reduce sunlight by as much as 70 percent, causing temperatures like that of the Little Ice Age, killing harvests worldwide and starving to death nearly everyone on Earth. It probably wouldn’t cause extinction. We’re so adaptable. Maybe 1 percent of our current population of 7.4 billion could survive, but 98 or 99 percent would not.

Even before the Russian invasion of Ukraine four months ago, the risks of global nuclear annihilation were at a peak. In January, the Bulletin of the Atomic Scientists set its Doomsday Clock at a mere 100 seconds from apocalyptic Midnight, compared to six minutes a decade ago. As Russia’s horrific war on Ukraine has persisted and the U.S. government has bypassed diplomacy in favor of massive arms shipments, the hazards of a nuclear war between the world’s two nuclear superpowers have increased.

But the Biden administration has not only remained mum about current nuclear war dangers; it’s actively exacerbating them. Those at the helm of U.S. foreign policy now are ignoring the profound lessons that President Kennedy drew from the October 1962 confrontation with Russia over its nuclear missiles in Cuba. “Above all, while defending our own vital interests, nuclear powers must avert those confrontations which bring an adversary to a choice of either a humiliating retreat or a nuclear war,” Kennedy said. “To adopt that kind of course in the nuclear age would be evidence only of the bankruptcy of our policy — or of a collective death-wish for the world.”

In sync with the overwhelmingly hawkish U.S. media, members of Congress and “national security” establishment, Biden has moved into new Cold War overdrive. The priority aim is to make shrewd moves on the geopolitical chessboard — not to engage in diplomacy that could end the slaughter in Ukraine and prevent the war from causing widespread starvation in many countries.

As scholar Alfred McCoy just wrote, “With the specter of mass starvation looming for some 270 million people and, as the [United Nations] recently warned, political instability growing in those volatile regions, the West will, sooner or later, have to reach some understanding with Russia.” Only diplomacy can halt the carnage in Ukraine and save the lives of millions now at risk of starvation. And the dangers of nuclear war can be reduced by rejecting the fantasy of a military solution to the Ukraine conflict.

In recent months, the Russian government has made thinly veiled threats to use nuclear weapons. Meanwhile, the U.S. has been shipping huge quantities of weapons to Ukraine, while Washington has participated in escalating the dangerous rhetoric. President Biden doubled down on conveying that he seeks regime change in Moscow, and Defense Secretary Lloyd Austin has declared that the U.S. wants the Russian military “weakened” — an approach that is opposite from Kennedy’s warning against “confrontations which bring an adversary to a choice of either a humiliating retreat or a nuclear war.”

We’d be gravely mistaken to wait for Washington’s officialdom to level with us about nuclear war dangers, much less take steps to mitigate them. The power corridors along Pennsylvania Avenue won’t initiate the needed changes. The initiatives and the necessary political pressure must come from grassroots organizing.

The U.S. government’s willingness to boost the odds of nuclear war is essentially a political problem. It pits the interests of the people of the world — in desperate need of devoting adequate resources to human needs and protection of the environment — against the rapacious greed of military contractors intertwined with the unhinged priorities of top elected officials.

The Biden administration and the bipartisan leadership in Congress have made clear that their basic approach to the surging danger of nuclear war is to pretend that it doesn’t exist — and to encourage us to do the same. Such avoidance might seem like a good coping strategy for individuals. But for a government facing off against the world’s other nuclear superpower, the denial heightens the risk of exterminating almost all human life. There’s got to be a better way.

Norman Solomon is co-founder and national director of RootsAction. He was a Bernie Sanders delegate from California to the 2016 and 2020 Democratic National Conventions. Solomon is the author of a dozen books, including War Made Easy: How Presidents and Pundits Keep Spinning Us to Death. His book Made Love, Got War: Close Encounters with America’s Warfare State was republished this year in a new edition as a free e-book. He founded the Institute for Public Accuracy, where he is executive director.