Nuclear Weapon Proliferation Is Not The Answer To Russian Aggression

Continued investments into nuclear weapons make us less safe and did nothing to deter Putin’s aggression in Ukraine. The only logical path forward is diplomacy. 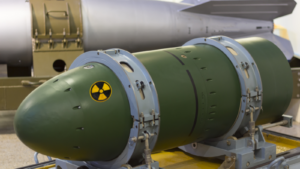 Russia’s criminal invasion of Ukraine has brought the dangerous possibility of nuclear war into renewed focus. In response to the invasion, many countries are looking to boost military spending, much to the delight of weapons contractors. Even more alarming are the calls for increased investments in nuclear capabilities by nuclear-armed states, and the calls for deployment of U.S. nuclear weapons into countries that currently do not host them.

Keep in mind, a single nuclear weapon can devastate a city, killing hundreds of thousands or even millions of people. According to NukeMap, a tool that estimates the impact of a nuclear attack, over eight million people would be killed, and another nearly seven million injured, if the largest Russian nuclear bomb were to be dropped on New York City.

Germany, in addition to hosting U.S. nukes,  is also ramping up its military spending to the tune of 100 billion Euros. In a major shift in German policy, the country has committed to spending more than 2% of its GDP on the military. Germany has also committed to buying US-made F-35 aircraft — jets capable of carrying nuclear weapons — to replace its own Tornado fighter jets.

In Poland, a country that borders Ukraine and Russian ally Belarus and does not have any nuclear weapons, the leader of the ruling right-wing national-conservative Law and Justice Party says they are now “open” to the US putting nuclear weapons there.

The nuclear fever isn’t just in Europe. China is accelerating its nuclear buildup amid rising fears of conflicts with the U.S. — with Taiwan a looming flashpoint. China  reportedly plans to build one hundred land-based nuclear missile silos, and a Pentagon report claims they’ll have one thousand nuclear warheads by the end of the decade. This will add to the nearly thirteen thousand nuclear weapons that already exist globally. China is also nearing completion of its own nuclear triad — the ability to launch nuclear weapons by land, sea, and air — which, according to conventional wisdom, would secure its nuclear deterrence strategy.

Additionally, North Korea has restarted its ICBM program and recently launched a test missile for the first time since 2017. North Korea claims the missile to be a “powerful nuclear war deterrent,” the same rationale every other nuclear-armed country uses for building and maintaining nuclear weapons.

U.S. allies in the region aren’t immune to the calls for nuclear weapons. Influential former Japanese prime minister Shinzo Abe, who has long pushed for a more militarized Japan, recently called for the country to consider hosting U.S. nuclear weapons — despite Japan being the only place on Earth to know firsthand the horror wrought directly onto people by a nuclear-weapons attack. Luckily, the comments received pushback from current leader Fumio Kishida, who called the idea “unacceptable.”

But too many leaders are not responsibly resisting the call for more nuclear weapons.

Ukrainian President Volodymyr Zelensky has many admirable qualities, but unfortunately he  isn’t helping to reduce the risk of nuclear war. In addition to his calls for a No-Fly Zone, he recently told 60 Minutes: “The world is saying today that some people are politically hiding behind claims that ‘we cannot stand up for Ukraine because there could be a nuclear war…believing that by not helping Ukraine, you will hide from Russian nukes. I don’t believe it.’”

“…by not helping Ukraine, you will hide from Russian nukes. I don’t believe it.”

President Zelensky appears to suggest that no matter if the West engages in a direct military confrontation with Russia or not, a nuclear confrontation is a near-certainty.

He does have reason to be concerned. The Russian Federation claimed only a few weeks ago that using nuclear weapons is an option if Russia faced an existential crisis. Russia even put its missile systems on standby. Zelensky told CNN, “all of the countries of the world” should be prepared for the possibility that Russian President Vladimir Putin could use tactical nuclear weapons in his war on Ukraine.

Zelensky’s plight is unimaginable, no doubt. But language that implies unavoidable nuclear attacks and a necessity for increased military intervention only pushes Russia closer to launching a nuclear attack — and the world toward a global nuclear war. This is not a path that Ukraine or the world should want to take. What is needed is more diplomacy.

The U.S. hasn’t made things better in the long term as the world’s leader in nuclear proliferation. And the U.S. is refusing to adopt “no first use” as official policy, assuring the world an offensive first strike with nuclear weapons is on the table. This happens to be the same nuclear policy shared by Russia — a policy that is striking fear across the globe right now, including nearly 70% of people in the U.S. who are now worried about a nuclear attack.

This is doubly alarming considering the U.S.’s history of fabricating evidence to go to war, as happened with George W. Bush’s lies about WMDs in Iraq and the falsified Gulf of Tonkin incident that was used as a pretext to escalate the Vietnam War.

The fate of humanity relies on the nine countries who possess nuclear weapons, and the countries they’ve shared with, never having someone in charge who decides their country is facing an existential threat, that control is never wrestled into irresponsible or malicious hands, that hackers don’t outpace government security systems, or that a flock of birds aren’t mistaken for an imminent nuclear attack, triggering a false alarm nuclear response. And keep in mind, ICBMs and sea-based missiles can’t be called back. Once they are fired, there is no turning back.

This risky and high-stakes, potentially world-ending strategy is not justifiable in an age when threats can potentially be spoofed, not just by rogue states, but by regular people and loose-knit groups connected anonymously online.

Ryan Black is a political activist and multimedia content creator. He is currently an organizer at RootsAction.org and ProgressiveHub.net. Find him on Twitter at @RBpolitic