A nuclear winter would be a global climate catastrophe. But climate change itself also makes nuclear war more likely. 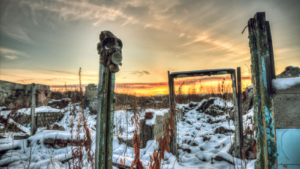 Climate change and nuclear weapons are inherently connected. Even a “limited” nuclear war would be catastrophic for the Earth’s climate.

Beyond the millions or tens of millions directly killed by the bombs, the smoke generated by subsequent firestorms would lead to a massive decline in agricultural production, which would lead to the starvation of up to an estimated 2 billion people.

To make things worse, the smoke and soot would lead to global cooling and ozone depletion that would allow more ultraviolet radiation to reach Earth’s surface.

These effects in total are part of what scientists call “nuclear winter” – global cooling resulting from smoke and ash blocking the sun. Climate models have projected this since 1983. Essentially, a nuclear war anywhere will lead to a nuclear winter everywhere.

Here’s the scariest quote from the 1983 study:

When combined with the prompt destruction from nuclear blast, fires, and fallout and the later enhancement of solar ultraviolet radiation due to ozone depletion, long-term exposure to cold, dark, and radioactivity could pose a serious threat to human survivors and to other species. … The possibility of the extinction of Homo sapiens cannot be excluded.

And this is just a so-called “limited” nuclear war. A full-scale nuclear war would be even worse for humans and the planet. A 2019 study showed that Iowa, for example, would experience temperatures below freezing continuously for 730 days in the event of a nuclear war between the U.S. and Russia. Billions of people would die from famine in the aftermath. Food production would decrease 90%. Global fish stocks would be decimated. The effects of a large-scale nuclear war on the environment and the climate mean that almost everyone on the planet would starve to death, if they weren’t killed in the initial blasts.

But it’s not just that a nuclear war would lead to a worldwide environmental and climate disaster – it works the other way, too. Climate change is already making the possibility of nuclear war, and nuclear winter, more likely.

Researchers have said that extreme droughts in Syria led to a mass migration of people to urban areas, which led to social issues which brought about the uprising there that eventually led to the U.S. and Russia both intervening there. That conflict, spurred on by climate issues, increased tensions between the world’s two nuclear superpowers.

In a 2019 paper, researchers found that intensifying climate change is likely to increase the risk of future organized armed conflicts, estimating that, “3–20% of conflict risk over the past century has been influenced by climate variability or change.”

This is why climate activists, who are doing amazing work and bring a ton of energy, skill, and passion to their activism, should consider becoming nuclear disarmament activists too. Because nuclear winter is climate change in fast-forward. It’s everything climate activists want to avoid, but it could happen in an instant.

Ryan Black is a political activist and multimedia content creator. He is an organizer at RootsAction.org and ProgressiveHub.net. Find him on Twitter at @RBpolitic